Download Your FREE Guitar
Cheat Sheet To Solo In Any Key 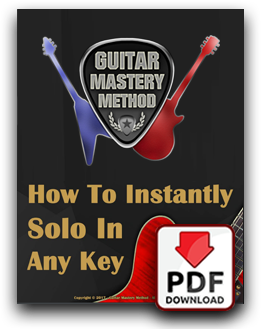 The guitar technique known as a ‘bend release’ is great for one simple reason… It sounds awesome.

And the good news is, as long as your string bending technique is sound, you’ll pick this up right away.

Basically, a guitar bend release is simply bending a note up (usually by a full note) and bringing it back down. This is done by keeping the pressure on the string as you allow the string to go back to being straight after you have forced it either up or down.

Used a lot by almost every legendary guitarist, this little technique is something you definitely want to be practicing.

In this online guitar lesson video, I go over the basics of a bend release, from there you should be good to go. Feel free to add your own flare as you see fit. If you missed my lesson on guitar bending basics, definitely check that out before diving into this one.

A great way to use a bend release is to also do what is called a ‘pre-bend’. As the name suggests, you bend the string before you play it, meaning that the only audible sound is the release itself. A great example of this, also using another technique called volume swelling, was used by Slash during his solo of the Guns N’ Roses song “Estranged”.

Eric Clapton, David Gilmour, Tony Iommi and many, many more use string bend releases in their solos, so if you haven’t already started watching the lesson here, those names should spur you into action

If you have trouble with your guitar bend release, remember that a couple of key things to make sure you do is to first, start with a strong grip of the string, at the top of the bend, keep the pressure on and only release it to the strings original position (don’t push it further the other way).