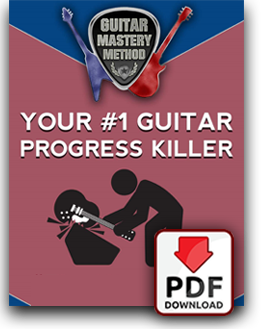 Have you ever heard one of those crazy repetitive guitar licks guitarists like Eddie Van Halen, Slash, Dimebag Darrel, and Randy Rhoads play?…

In this guitar solo lick lesson, I break down what these rock legends do to make sure their guitar solos are powerful & more memorable than ever.

So what are these guitar legends actually doing?

They’re taking a simple guitar lick, turning that guitar lick into a pattern, and repeating that pattern over-n-over again until they have one crazy guitar solo lick that captures their audience.

These licks build massive tension. And this is what makes these guitar licks so damn unforgettable.

And although these guitar solos sound INSANE, they’re very easy to replicate. Plus you’ll INSTANTLY be able to come up with your own repetitive guitar licks on the fly…

So throw your music theory out the window, experiment with your own guitar solo licks.

Just repeat those guitar licks again and again and create your own unforgettable guitar solos.

The more you play around with this, the more you’ll start to get it.