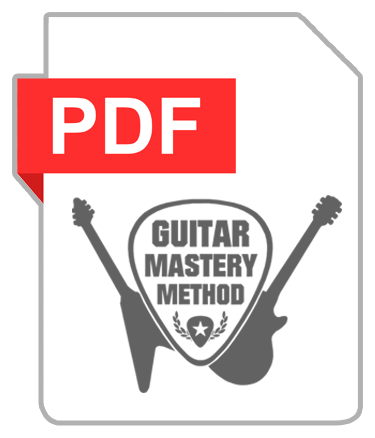 These aren’t your dad’s major scale patterns, so get ready for things to be kicked up a notch!

The biggest one is that you will get multiple patterns of the exact same notes under your fingers, which will be essential in allowing you to visualize patterns and shapes on the fretboard.

You’ll also be able to walk your fretting fingers across all of the strings in different ways. Though each major scales pattern has the exact same notes, they’re each laid out differently. This will get your hands more familiar and fluent with how notes can be arranged on the fretboard.

And that’s just your fretting hand! You can also use this exercise to sharpen your alternate and economy picking!

This guitar major scales lesson will walk you through each pattern, one at a time, and you’ll see how each major scales pattern has a unique order of how your fingers play them. So every finger will build strength and speed equally in this exercise.

Of course it wouldn’t be a proper guitar workout without using a metronome! I’ll show you how to find the right bpm as a starting point and show you your options when practicing to a certain bpm.

Remember how I said we can find each major scales guitar pattern by using one fret? I’ll also show you how to use that idea and move it up the fretboard for maximum coverage.

This is an exercise to take with you from now on. It’s a fantastic way to get your fingers warmed up, while also building dexterity, speed, and timing as you practice with a metronome. Next thing you know you’ll be running through this exercise while sitting backstage getting ready to rock the stage and melt some faces 😉